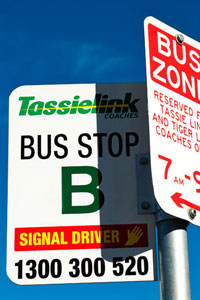 In July 1985, the Invicta group (based in Melbourne, Victoria) expanded to Tasmania, initially to Devonport with the purchase of Morse’s Bus Service. The then lack of future opportunities in along the North-West coast saw this service being sold in 1990, but not before it had led to the purchase and development of a range of services to wilderness icons and areas. The first to be acquired was from Devonport to Cradle Mountain, the second was Tag Along Tours in Hobart, and finally Mountain Stage Line in Launceston. This was the beginning of the Wilderness Network.

In 1989 we started developing both the product and the marketing direction of the Company. The company “Tasmanian Wilderness Travel” became a well-recognised operator in the Tasmanian nature-based tourism area, with an influence far greater than its size would indicate.

In 1997 the company purchased and amalgamated TRC Travel and Tigerline Coaches with Tasmanian Wilderness Travel. In 1999 we added the Port Arthur, West Coast, East Coast and Huon Services from Hobart Coaches. Later acquisitions includet he service between Cressy, Longford and Launceston (October 2005).

In 1997 Tasmanian Wilderness Travel was the very proud recipient of three awards at the Tasmanian Tourism Awards. In 1998 we repeated our success in the Awards. In 1999 TWT was inducted into the Hall of Fame, having won Awards for three years in succession. In 2000and 2001 Tasmanian Tours and Travel won another award. Further Awards were added to this impressive list in 2003 and 2004. We won again in 2005, and again have been inducted into the Hall of Fame.

Tassielink Transit separated from the Invicta Group  in 2001 owned within the John Usher extended family, carrying on a family tradition of coach operation which began in 1947. The family traditions continues with Managing Director Shane Dewsbery who had been with the company for 26 years taking ownership with his family in September 2020.

The introduction of new operating contracts in January 2020 and the design of new networks seen the development of new routes and timetables, improving the transport options for the communities we serve. These changes have led to significant and continuing patronage improvement on most of our services.