How did we do?

Why on earth (or at least in Tassie) use Tassielink bus advertising?

If you need to deliver your message to targeted locations, you can’t go past Tassielink’s rural and regional bus routes. From the East Coast to the West Coast, Northern Midlands to the Tasman Peninsula and everywhere in between, we can drive your message home.

Fear of a T-Rex eating us for lunch makes us look at bus advertising! Because bus advertising is moving, instinct forces us to look at it, a reaction left over from the prehistoric age where watching out for predators was crucial for survival! Ingrained, unconscious behaviour makes people look at the ads… if they’re there!

Bus Advertising is a high impact, moving billboard that grabs an audience’s attention,
directly at eye level, giving your brand momentum in the locations you need. 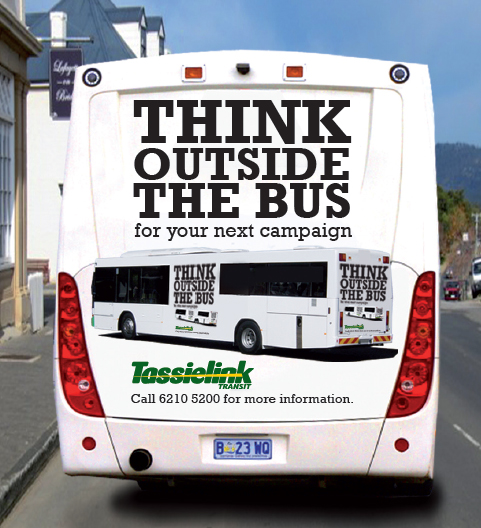 The upside of  the outside of a bus.

Bus advertising is to reach a large audience repeatedly and consistently. It has a big advantage over TV and radio advertising, as itit does not depend on the channel a person is watching or listening to and cannot be turned off. People are literally forced to see them…  we’ll push it on everyone! Repetition will ensure your brand is  front and centre in your customer’s mind  when they think about whatever you are offering.

We won’t pull your ad down just because your time’s up.

Tassielink bus advertisements often remain on buses longer than the contracted period for no additional charge. If we don’t have another advertiser knocking  down the door for your spot at the end of the contract, it’s yours until we do.